Public transportation directions from Uplift to the Instituto: 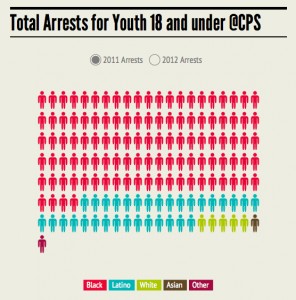 Last week, Project NIA (www.project-nia.org) released a new report titled “Policing Chicago Public Schools 2: School-Based Arrests 2011 and 2012.” The report relies on data from the Chicago Police Department (CPD) to show the types of offenses and the demographics (gender and race) of the youth arrested on CPS properties in calendar years 2011 & 2012.  The report builds upon the 2010 data that we presented in January 2012.

CPD reports its data by police district rather than by individual school so this year we also worked with students from Loyola University to create an interactive application that allows individuals to search for crime and arrest data by school for the 2011-2012 school year too.

The key data points in the report are that:

2.       Black youth are still disproportionately targeted by these arrests. While they represent about 42% of CPS students, black youth accounted for 75.5% percent of school-based arrests in 2012.  This mirrors the general trend of disproportionate minority contact within the juvenile legal system.

This report was produced and written by Mariame Kaba and Eva Nagao. To access the full report, interactive application, infographics and raw data, visit the Policing Chicago Public Schools 2 site here. Continue the discussion at our workshop, The ABCs of the PIC: Teaching About Prisons, at the upcoming Free Minds Free People conference in Chicago.