This year’s Conference will take place in the Twin Cities of Minneapolis and St. Paul. The main conference site is on the West Bank campus of the University of Minnesota-Twin Cities 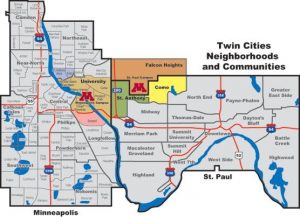 Network for the Development of Children of African Descent

We nourish Twin Cities movements for social justice in education so we may all survive and thrive. We create spaces to share tools, raise consciousness, and build people power; connect and collaborate with those fighting to transform our education system; and organize until our schools are run by the direct democracy of those who have been historically and systematically oppressed, including students, families, education workers, and communities.

Coalition to Increase Teachers of Color and American Indian Teachers

The Coalition to Increase Teachers of Color and American Indian Teachers in Minnesota unites individuals, organizations and communities concerned about the lack of racial, cultural, and linguistic diversity in the teaching force which is 96% white even though students of color and Native American students make up 34% of the K-12 population in MN and are the majority of students in many urban, suburban and rural schools.

The State of Education in the Twin Cities

Minnesota occupies Dakota and Anishanabe land. It has been and became home to many Indigenous peoples. Minneapolis exists on sacred and stolen Dakota land, where communities continue to fight each day for survival. Indigenous justice and land rights are a core component of the educational struggle that confronts us.

The often untold Minnesotan history of resistance, yesterday and today, will deeply shape the conference landscape. In 2019 we celebrate the 50th anniversary of the African & African American Studies department at the University of Minnesota, as many other universities across the country share similar anniversaries. Like other urban hubs in the US, the Twin Cities faces the consequences of the systematic dispossession of humanizing, quality education from our youth and communities. Our local struggles for Indigenous sovereignty, ethnic studies, equitable funding for education, recruiting diverse teachers, culturally sustaining curriculum, and schools that deserve our youth mirror that of many other cities across the nation. Yet, the Twin Cities is unique in terms of our demographic make-up, and potential for alignment across multiple municipalities. Minneapolis, St. Paul, and the larger metro area are home to large populations of immigrant and refugee communities from East and West Africa, Central and South America, and Southeast Asia along with Indigenous communities and African Americans. Each of these communities have youth navigating traditional public and charter schools. Consequently, there is a strong network of youth organizers and leaders across the cities.