This year’s Conference will take place in the City of Baltimore in Maryland. 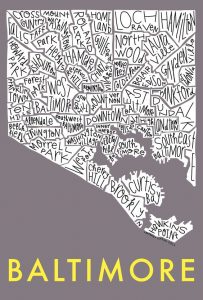 Baltimore Algebra Project
Baltimore Algebra Project works to ensure that all students have access to quality, 21st century education which includes learning and mastering advanced math.    Baltimore Algebra Project staff is completely comprised of young people (under the age of 25), both High School and College aged students who work as tutors, organizers, leaders, and executives for our organization.   They strive to work under a true democracy so that everyone gets their voices heard.  The Baltimore Algebra Project organizes themselves into committees that work under several branches including our Executive team, Leadership team, Organizing team, and our Math Literacy team. We believe that education is a constitutional right, and until this is recognized, it is our duty to educate ourselves and those around us.

Baltimore Teachers Union
The Baltimore Teachers Union works for the betterment of the teachers, paraprofessionals, school secretaries, teachers, IT specialists and district-level administrative employees by organizing, supporting and enforcing the terms of negotiated agreements and by becoming a powerful, political force which influences the direction of education in the Baltimore City Public School System and improves the academic achievement of children.

BMORE caucus (Baltimore Movement of Rank and file Educators)
The BMORE caucus The Caucus of Rank and File Educators (CORE) is a group of dedicated teachers, retirees, Paraprofessional School Related Personnel (PSRPs), parents, community members and other champions of public education. We fight for equitable public education and hope to improve Baltimore and it’s Teacher’s Union so that it fights both on behalf of its members and on behalf of Baltimore students.

Leaders of a Beautiful Struggle/ Baltimore United for Change

Baltimore United for Change (BUC) is a coalition of organizations and activists with a long track record of working for social justice in Baltimore. The BUC coalition came together three days after the murder of Freddie Gray, and hit the ground running.   We work to respond to the Grassroots by raising over $100,000 for jail support for community members, to provide safe harbors for students and families throughout the city, and trainings on nonviolent civil disobedience and “Know Your Rights”.

The State of Education in Baltimore

One year ago in April of 2016, days before the anniversary of the killing of Freddie Gray,
Hundreds of Baltimore Students staged a walkout against standardized testing to demand a shift in resources from testing to youth development.

Charm City, or “Baldamore” was founded in 1729 and has become the home to faces from all across the world. If you’re just visiting, you have the option of coming here by plane, train, car,  big named buses like Greyhound and Bolt and even water taxi!

If you decide to fly with the birds, you’ll be greeted by the essence of Baltimore at BWI, the busiest airport of the DMV. Another way to ride in style, as mentioned, is by water taxi. Our taxis are comfortable and affordable (only $9/adult for the day!) and give you a chance to take a little of Baltimore in, as it passes some historic sites and landmarks that make us special, like the aquarium.

At the National Aquarium, you can catch a few dolphin shows, watch a movie in the cinema, and even get face to face with a stingray! If water isn’t your thing, you could walk around the Historic Inner Harbor and enjoy some the cuisine and free entertainment in the Circle while overlooking the port. After eating you could work off the pounds and take a nice stroll to Federal Hill, which still houses a cannon from our war days.

More popular sites include Edgar Allen Poe’s house and the Great Blacks in Wax Museum, which displays Blacks who have changed history, and highlights the gory reality of slavery and the Jim Crow era. Like art? Check out the Walters Art Gallery or Baltimore Museum of Art to get your Picasso and artsy cafe’ fix! BMA is located right next to Hopkins University and Historic Charles Village (both not too far from Loyola), where our free buses ride pass on their way to Penn Station, one the top 10 busiest rail stations in the US. Baltimore is full of fun and history, and we’re so excited you’ll be joining us for the ride!