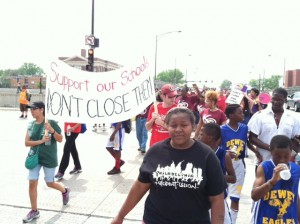 “No if’s…No but’s…we don’t want no budget cuts,” was the chant as over 3000 students rallied in front of the Philadelphia School District building after having walked out of 27 schools in the city on May 17th. Those students, upset at the proposed “Doomsday” cuts proposed by the Superintendent, marched down Broad St. effectively shutting it down and rallying at City Hall. The message was clear that the students wouldn’t just sit by as their schools are stripped of everything except teachers and police officers. 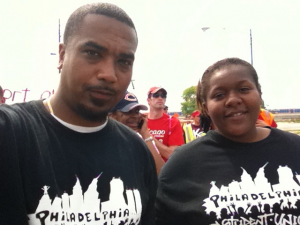 As many of us already know, this is not an issue unique to Philadelphia. The under-resourcing of public, the attacks on teachers, and mass school closings are happening all over the country. For that reason, I, along with one of my youth leaders from the Philadelphia Student Union traveled to Chicago to join them in their fight to stop the single most school closures in American history. Because as PSU member, Sharron Snyder put it in her message to the hundreds rallying in Daley Plaza…”Philadelphia has your back!” We spent four days in the streets of Southside Chicago as part of the three day marches with the folks of the Kenwood Oakland Community Organization, we met with leaders from Blocks Together and the Chicago Teacher’s Union, we were there with the activists as they staged a sit in at City Hall. 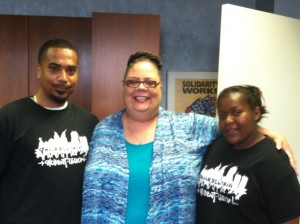 In the end, Philadelphia has voted to close 24 schools. In Chicago, 50. These closures, like some many in all our urban and rural districts, will have devastating affects on the tens of thousands of students, disproportionately Black, disproportionately poor. But the fight is not over. As we’ve seen in the streets of Chicago, Philadelphia, New York, DC, etc. The fight is not over. The movement to save public education is one that will take all of us coming together, fighting across state, class, and racial lines against a government backed by wealthy philanthropists and misguided priorities focused on jailing and sending our youth to war, as opposed to educating them. In July, PSU will be traveling back to Chicago with more of our students from Philadelphia to join the Free Minds Free People Conference. There we’ll be presenting and building relationships with folks from all over. The time is now to take our fight to the next level. As Sharron has said to me during our travel across the country in the spirit of solidarity…”We will win. We have to win.” 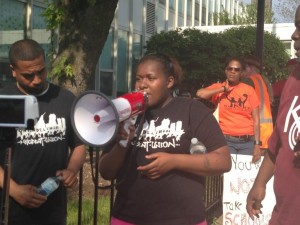